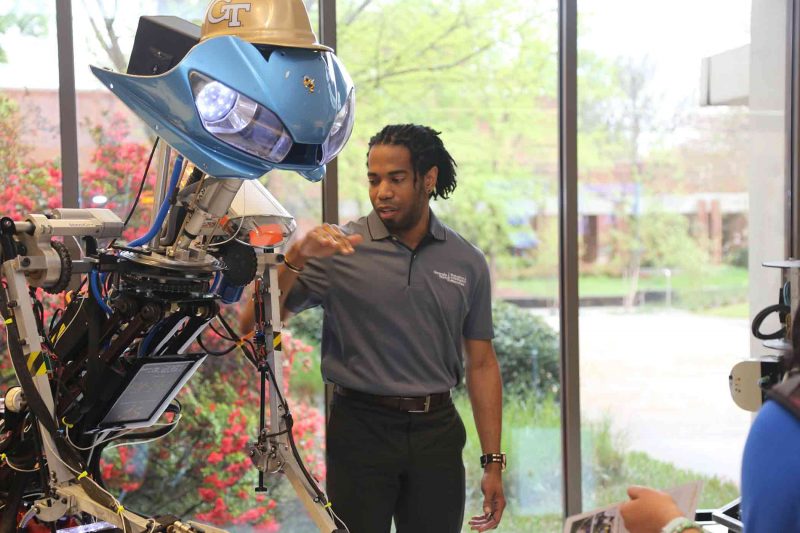 For people of a certain generation (sorry Millennials!), the new robot occasionally roaming the halls of the School of Civil and Environmental Engineering might look a little familiar.

The latest addition to Yong Cho’s bevy of robotic tools is this 7-foot-tall, 800-pound behemoth that looks just a little like Johnny 5from the ‘80s movie franchise “Short Circuit.”But this robot — his creator calls him AWSM, “Awesome” or Autonomous Working Smart Machine — will offer Cho and his research team the chance to open new veins of construction engineering research.

“There are so many different applications,” Cho said. “This can interact with workers. We want it to work with people, and we can study how people react: do they fear the robot? Do they prefer not to work with it? They can work together, so we can identify how to make the robot work comfortably with people.”

Cho said a robot like this, with good mobility and the ability to grasp and control items, could help construction workers lift materials or do site inspections and identify safety issues.

The possibilities are enormous, he said, thanks to the machine’s creator, Dimitri Seneca Snowden. Snowden donated the robot to Cho’s Robotics and Construction Automation Lab this spring.

“I have found [Georgia Tech] to be a very progressive school, very advanced, and the thing I like about this school is it teaches you how to problem solve,” Snowden said. “That is what I appreciate. I had to problem solve the hell out of this thing. So, what better place to put him?”

Snowden built the robot using a hybrid of custom designed and repurposed, off-the-shelf parts — treads from a snowmobile, LED fog lights from an SUV, windshield wiper motors from a school bus to move the robot’s arms.

Snowden has no formal training in robotics, just the will to, as he puts it, “design and manage objects, spaces and the human experiences in between.”

AWSM’s original purpose was to inspire underprivileged children through an accompanying curriculum Snowden designed that introduced robotics concepts and incorporated a spectrum of subjects, from math and science to history. He built the robot to be adaptable and customizable, he said, and that’s exactly what’s about to happen in Cho’s lab.

“Let’s give him a 2016 overhaul,” Snowden said. “This is the place that I think it should happen.”

That overhaul could include everything from adding new functions and updating the hardware and software to more radical changes like separating the top half from the treads and using those parts in a radically different way.

At a minimum, Cho said he wants to add some sort of “vision” system so the machine can “see” its surroundings and collect data like some of Cho’s other robots.

Snowden said he’s excited to reimagine his creation and even collaborate on something new.

“I have a couple other ideas for construction applications where I think we can apply a newer version of him, a newer robot,” Snowden said. “Yong has already said that he would like to work in tandem to see if we can create some other cool gadgetry.”